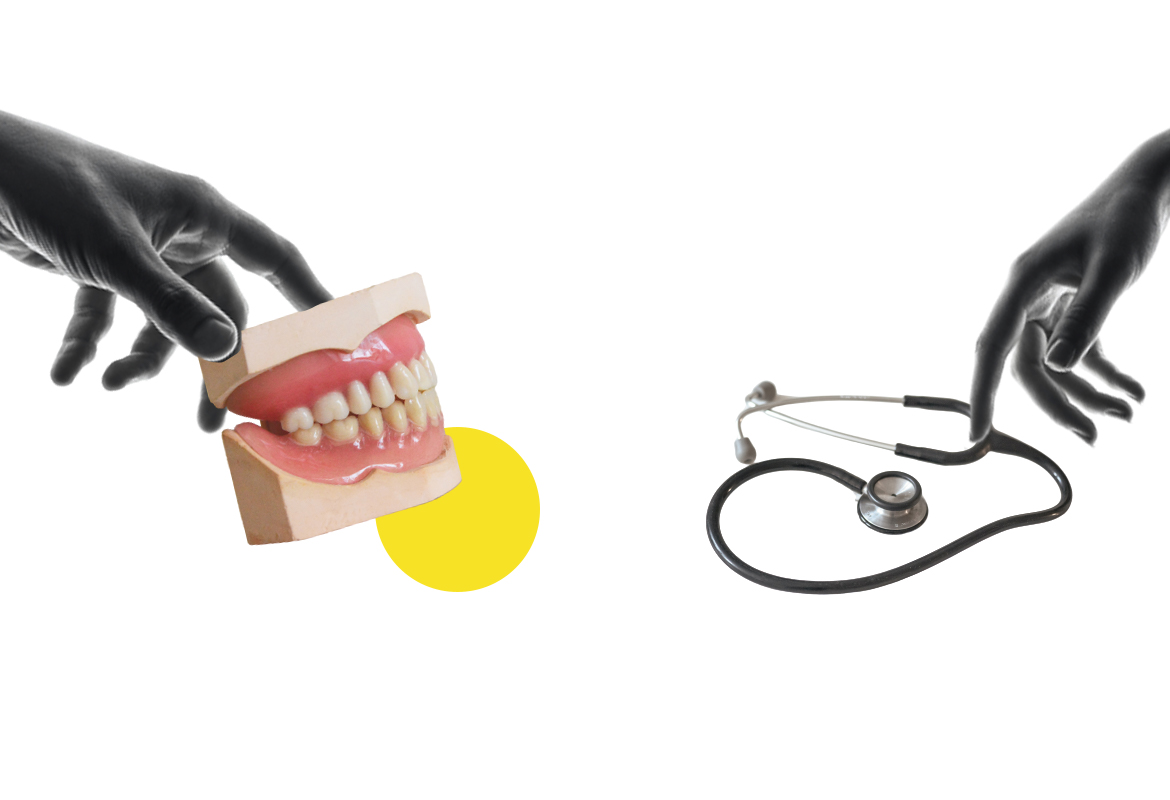 My teeth are in my body, so why is dental separate from health?

Teeth are, obviously, a part of the body. So why TF are there different insurances for dental and for health?

It doesn't make sense. We don't have different insurance for our hands, our ears, our stomachs, our brains, etc. And if you've got mouth issues, it can profoundly affect your general health.

Take the tragic story of Deamonte Driver, a young boy in Maryland. He had a toothache that went unaddressed, and by the time he went to the hospital the bacteria from the abscess had spread to his brain. After two operations and more than six weeks of hospital care, Deamonte died. A routine tooth extraction (less than $100 at the time) would have saved him.

And poor oral health has serious economic implications. First, having more dental care requirements means paying more money. Second, there are studies that show for every tooth that's missing you lose $720 in earnings.

Given how important dental health is to one's holistic wellbeing, why on earth are health and dental separate? It all began with two dentists in Baltimore who were contemporaries of Edgar Allan Poe.

In the 1830s, Baltimore was the hub of dentistry and new explorations in oral health. Dentists were experimenting with things like tooth transplants (yes, taking someone else's teeth and "installing" them into another's gums). Where did these teeth come from? This post lends a hint:

"A lady of wealth and respectability recently died and left notice, stating that no one need trouble themselves about her, as all her teeth had decayed long ere she left this world - and those she had been using she had bequeathed to a friend."

But we digress. What's really important is the meeting of two dentists: Chapin Harris and Horace Hayden

In 1838 Chapin Harris, a practicing dentist, took the lessons he learned practicing dentistry and turned them into the first dental college textbook: The Dental Art. A detail-oriented and scientific thinker, Harris' studies helped jumpstart public understanding of the importance of dental hygiene.

Around the same time the ambitious Baltimore dentist Horace Hayden made his first attempt at creating formal medical education for dentists. He gave lectures on dentistry at a medical college. His students didn't share in his ambition and gave the class poor reviews, saying he lacked evidence in his teachings.

Harris and Hayden bonded over their common desire to take dentistry away from the barbershop realm and into the world of medical experts. They joined forces and their first act was publishing the American Journal of Dental Science in 1839. The next year they launched the American Society of Dental Surgeons.

Dentists lacked an avenue for professional dental training, so Harris and Hayden tried to create dentistry professorships in medical schools. They went to the College of Medicine at the University of Maryland and requested to put dental instruction in the medical course. Legend has it they received a rejection letter that said, "the subject of dentistry is of little consequence." They tried again at New York medical school. Same outcome.

When you can't join them, make your own school. They raised money from colleagues and opened the Baltimore College of Dental Surgery. And thus began the fork in the road between dentists and medical doctors.

How did dental care grow separate from healthcare in America's healthcare system?

Since the 1840s dentists and doctors remained separate in America's larger health care system. Three large trends deepened the divide to result in the separate systems we have today:

Health insurance in the US started in the 1920s and gained momentum after World War II. But dental care was never part of the covered services in these early versions. In 1954, dentists and employers in California, Oregon, and Washington set out to increase access to dental care, and Delta Dental was launched as the first dental insurance program for employees.

By 1960 only 2.3% of Americans had some kind of dental insurance. In 1965, Congress enacted Medicare. Policymakers didn't value dental care as much as other forms of medical care and left it out of Medicare. The next year Delta Dental Plans Association was created and they partnered with the International Association of Machinists to create the first cross-state dental benefits program.

This solidified the norm for dental and health insurance plans to remain separate.

Will dental insurance and medical insurance ever band together? Not under the current system.

Essentially, it's like trying to mix oil and water. To combine them we need to boil down each to their simplest elements before we could get them to cooperate. We aren't holding our breath for the incumbent insurance companies to make this happen.

Instead, it's going to take innovative companies in the health, dental, and insurance spaces. Companies who aren't afraid to "think wrong" will find creative ways to use data and technology to create better patient experiences for patients. And to take into account the total health picture of each patient. Then the separate paths of dental and health can converge again for the patient - which makes sense since our teeth are still a part of our body.